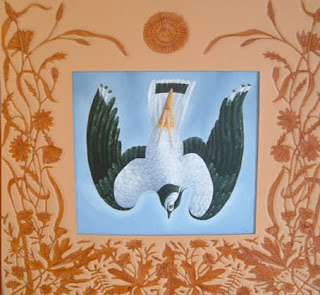 Joy Oh Joy and happiness unbound. Finally and after a perpetual winter, Spring has arrived and with it my favourite event. The return of my most treasured birds the Lapwings. With them the New Year begins for me.
They fly inland in great flocks from their coastal retreats, dividing into ever smaller numbers as they locate the high pastures that will support them in their bid to raise this years young.
The hay meadows that frame the view from my studio sustain about 10 breeding pairs although it is the 3 pairs that yearly nest in the field closest to the farm that I spend the months watching. They arrive in mid March followed in a week or two by the drumming snipe and the largest of our up-land waders the melancholy Curlew. The air is filled with the haunting calls of these nesting visitors. It is however the first month or so of the Lapwings appearance that I truly love. The beautiful choreography of their territorial and courtship flight. The pitching and plummeting as they unfurl their dark emerald wings, diving headlong towards the ground simply to sweep upwards again, stalling only to wait for their partner to join them in their aerial waltz, fills the heart.
In the very early hours of a still morning, I work in the studio with the door open. The fresh air floods in and the sound of the dawn chorus begins. Like wise the Lapwings begin to take flight and their own ' pee-r-wit' call from which they get there more local name, 'Peewit' fills the sky. They fly more earnestly to ward off any bird they see as an interloper. Crows, Gulls, birds of prey are seen off like some dog fight from the battle of Britain. Pheasants are routinely dive bombed, despite being of little threat.The stage on which they perform their ballet comes alive this time of year. The fields become coloured with the new grass and the buttercups and daisies start to push through the wet soil. The backdrop sky expands with 'Constable' clouds and scores of jackdaws scour the area for carrion.
Once the rather sparse nest has fulfilled its purpose and the chicks leave its confines, the parent birds keep an eye on both sky and ground. Its so sad to see a chick being carried off by a slender stoat or weasel. The birds try everything in their arsenal to defend their young, including feigning injury. Dragging their wings across the ever taller grass in a bid to draw the predator away. I have seen this but can't say whether its a successful strategy. I do however on occasion see the week or two week old chicks wandering all about the hay field and pray that their little legs will be able to outrun the rusty iron machinery dragged by the local farmers ancient tractor. Within a month or so the chicks are big enough to see easily and soon after are themselves able to tentatively take to the air.
When I was a small boy playing the battle of Gettysburg or Waterloo in the fields around us. i came across the shallow depression of a Lapwings nest with four pale brown and dark blotched eggs. To my amazement two of the eggs started to move, tiny cracks appeared and within half an hour or so the rather prehistoric chicks emerged. I moved away quickly after that and saw the frantic parents return to the nest and begin their protective watch. I have loved these wonderful birds ever since.
Maybe like the Lapwing, I too should start thinking of wintering in some more suitable climes. The older I get it seems my own prestigious girth offers less protection against the cold and wind, maybe a few warmer months away would be a perfect tonic. The problem being I might get to like it and the idea that I could miss the arrival of these magical birds means for me ever more early Spring days with my nose pressed against the window of my studio.
Posted by rowneyart at 03:07 2 comments: