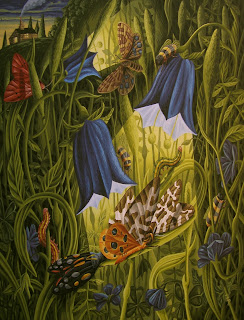 When I was young I used to slide into my Wellington boots, grab a torch and venture out into the dark woods that encircled our home. There always seemed a stillness at night, apart from the almost imperceptible snuffling of Hedgehogs or the brush of the Badgers stroll. I would Illuminate Tawny Owls perched on the high branches of Beech trees and observe Tiger moths resting on forests of Rosebay Willowherb. my wanderings would not take me far from home but such a distance from the bright transparency of my daytime excursions. Some times the Moon would light my way and I could walk silently down to the rivers edge and watch the faint trembling flight of Pipistrelle Bats and Sea Trout, their nose upstream, waiting for any insect floating down the murky water.
It is incredible what there is to see at night, that is once your eyes have become adjusted to the darkness . On late summer evenings the magical flickering dance of nocturnal moths, their presence lit by the farms window lamps, their camouflaged wings exposed against the black curtain of the sky. Beetles scurry to avoid the eager tongues of my ponds frogs and the Golden Rudd weave elegantly around the lily pads.
For the last year or so I have been trying to capture some of these nightly happenings. In a way, shining a light on the magic of darkness. Sometimes my own colour palette makes dark images. All too difficult to hang on the neutral based walls of a country house. To me though they might simply hang like a window at night. One from which if your lucky enough might reveal the beauty of raven black and some of the life that inhabit it. Some where in a field near to where we live, Harebells light up and Bees and Crane-fly and Ladybirds and voles, declare a truce and gather round its glow. Hush, go quietly and don't tell a soul.
Posted by rowneyart at 13:40 2 comments: